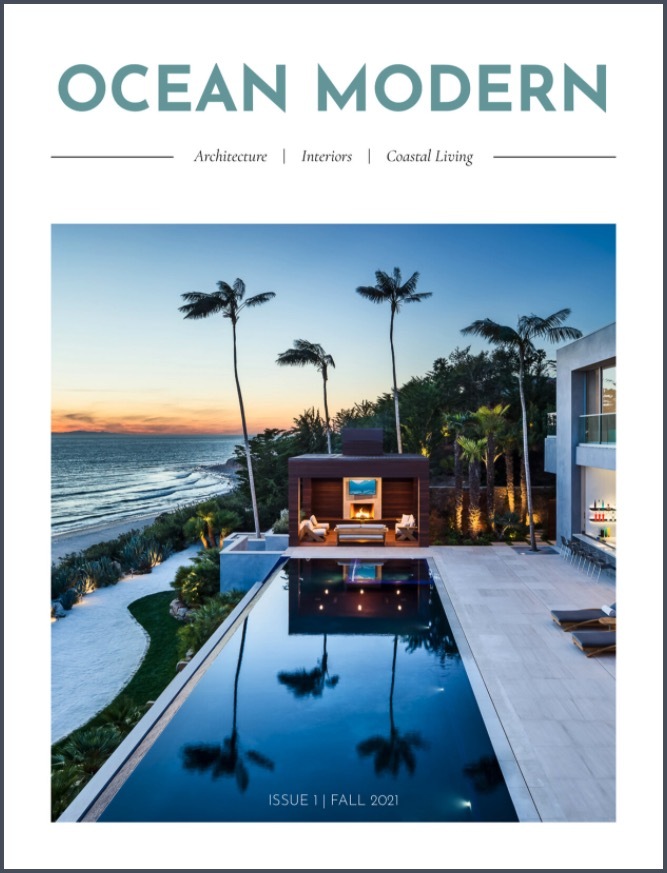 Delving into the most popular home designs for residential architecture along the California Coast, from Santa Barbara to San Diego

California coastal architecture takes inspiration from all over the world, from the Mediterranean to Mexico and from Asia to the American Northeast. The most common styles of coastal architecture in Southern California include the Cape Cod (with a contemporary edge), Craftsman Bungalow, Spanish or Mediterranean Villa, Modern (Bauhaus and other mid-century movements), and Contemporary, with the last two bringing industrial and commercial architectural elements into the residential landscape. The Bauhaus feel, especially popular in Palo Alto and other Northern Californian towns, is still well-loved in the south, with many newer builds featuring sleek lines and long-lasting building materials like concrete and steel. Regardless of location along the coast, most California beachside homes are eclectic, drawing inspiration from many different periods and regions.

According to A Field Guide to American Houses by Virginia Savage McAlester, Cape Cod houses were originally constructed on the East Coast — with their salt-box shapes and folksy side-gables — because they were “better adapted to the severe and confining New England winters,” weather trends not represented in the mild climate of Southern California. Today, as described in One Kindesign’s article “Classic Cape Cod design gets a modern twist in Southern California,” the angular shapes, wooden siding, and A-frame entryways of Cape Cod styles are still popular, but require a bit of bohemian flair for success in SoCal.

Referring to one build designed by GDC Construction in La Jolla (a seaside community of San Diego), One Kindesign notes how the classic style has been adapted to meet the needs of California home buyers, detailing a “metal standing-seam roof and a stunning hardwood deck” complimenting the traditional “simple white finish of the exterior.” Cape Cod styles typically offer a large interior (based on the salt-box design of earlier renditions), providing ideal space for entertaining and easily handling an open kitchen and the wide floor-to-ceiling windows that are popular with SoCal residents. Today’s Cape Cod-inspired homes along the coast feature less traditional siding materials, such as the brick facing featured in the above right image of the Point Dume bluff house (Malibu) designed by architect Doug Burdge.

In her article “There’s a Reason Original Craftsman Style Homes are Around After 100 Years” for House Beautiful, Maggi Burch describes the Craftsman style as one that grew out of the British Arts and Crafts Movement in the early 20th century and found its footing on the West Coast despite its Victorian roots. Burch attributes the movement to Gustav Stickley, whom she describes as “‘a furniture maker turned promoter of the English Arts and Crafts movement in American who popularized the style through his influential magazine The Craftsman in the early twentieth century.’” Like Mid-Century Modern architecture and design, Craftsman-style houses focus on “simplicity in form, use of local materials, and honesty in construction,” three elements that are experiencing a resurgence in popularity in the contemporary West Coast home buying market.

House Beautiful assigns the primary characteristics of a Craftsman bungalow as “horizontal lines, with low-pitched gable roofs that extend far out past the home’s exterior walls, often with exposed beams or rafters,” giving each home a unique, rustic-but-charming appearance that emphasizes an “artisanal approach.” Today, both century-old and contemporary Craftsman bungalow builds can be found up and down the California coast. For instance, the “stunning California Craftsman” depicted in the above photo on the right, currently for sale for just under $3 million in Venice Beach, boasts four bedrooms, a large staircase, “two gourmet kitchens,” and “immaculate white French oak floors throughout,” all elements of its remodel. The “transitional Craftsman” pictured in the above right image, located in San Diego, “enjoys a wonderful flow between the indoor & outdoor living spaces” and contains traditional elements of Craftsman design including hardwood floors and beamed ceilings.

Mid-Century Modern houses include styles ranging from International and Bauhaus to New Brutalist and Ranch, designed by powerhouse architects like Frank Lloyd Wright Richard Neutra, Joseph Eichler, and George Fred Keck. These styles remain immensely popular throughout California because their featherlight-appearing construction – including large panes of glass and sleek lines – also uniquely focuses on the importance of function and utility. The mid-century modern style remains so well-liked that a Richard Neutra house, pictured above, left, designed by the architect for the Hollywood Sten-Frenke couple in the 1930s, was projected earlier this year to sell for millions and was described by Pauline O’Connor in her article “Filmmaker Marc Forster lists Neutra’s stunning Sten-Frenke House for $15M” for Curbed LA as “the epitome of a California dream.”

In her article “What Classifies A House Style: What Makes A Contemporary Home?” for Fresh Home, Tara Mastroeni delineates a contemporary house as one that offers an “irregular, asymmetrical façade, strong emphasis on geometric shapes, large [or] clerestory windows, use of recycled building materials, and mixed materials on the exterior (e.g. wood and stone).” The interior of a contemporary build typically provides an open floor plan, natural light throughout, and organic, natural materials in décor and construction.

As the article explains, contemporary architecture is one of the first movements that has not been defined by its “direct opposition to the…era that came before it,” with contemporary architecture actually borrowing design elements from “modern design, its predecessor,” as apparent in the “emphasis on clean, simple lines and a connection to the outdoors.” Contemporary homes, while echoing the essence of modern architecture, often step away from colder, industrial elements, focusing instead on warmer tones; however, many along the coast continue to embrace the solid concrete look of the previous generations of houses.

The home pictured above on the right, currently listed by F. Ron Smith and David Berg on Zillow for $3.2 million and located in the Sunset Mesa neighborhood of Malibu, emphasizes the connection to the outdoors so often underlined by contemporary builds. Featuring sweeping Santa Monica Mountains and Pacific Ocean views, the listers describe the property as “the best in secluded coastal living.” The Malibu “architectural masterpiece” pictured above on the left, designed by Doug Burdge and located just off PCH, offers “a tropical oasis with organic native landscaping” and “180 degree sunrise-to-sunset ocean views for quintessential Malibu living at its finest.”

In her article “18 Breathtaking Mediterranean Homes” for The Spruce, writer Lisa Hallett Taylor describes the essential elements of Mediterranean villas found throughout California, many of which are features of other styles listed above. Marks of a Mediterranean home include eclecticism or “mixing of old styles with modern tastes,” “easy transition between indoors and outdoors,” “spaciousness created by high-beamed ceilings and archways,” varied building and decorative materials such as “brick, stone, ceramic tile, and wrought-iron,” and outdoor spaces and water features, including “patios, courtyards, balconies, terraces, fountains, ponds, and pools.”

The Tuscan estate pictured above on the left, built in 1957 in Malibu, is described by listing agent Sandro Dazzan on Zillow as beautifully augmented by “vintage tiles and antique entry door” with a “magical and private ocean view.” The property offers a number of features commonly associated with Mediterranean residences, including the stucco exterior, large windows, and clay-rimmed pool. The nearly hundred-year-old home above on the right, located on Carbon Beach in Malibu and listed on Zillow by Chris Cortazzo, offers “a lushly landscaped courtyard with Koi pond,” a simple exterior, and stunning exposed beams throughout the interior. 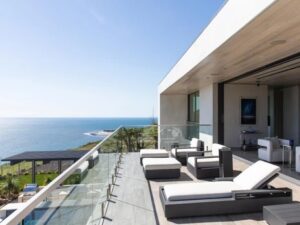 Ocean Modern is proud to announce our first annual spotlight of superior architectural firms located throughout the coastal U.S. 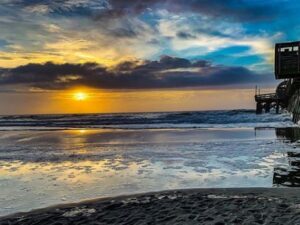 From Fort Lauderdale, Florida to Charleston, South Carolina, the Southeast US offers travelers a mix of high design and low-key… 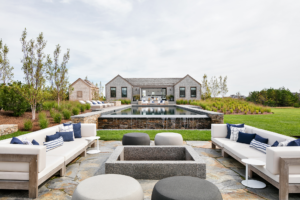 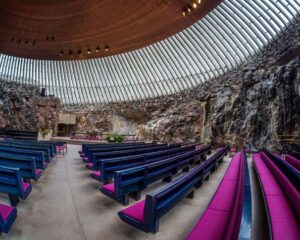 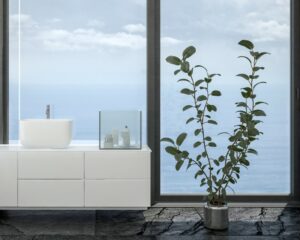